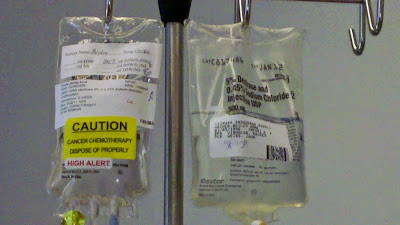 I finished up my second round of chemo this past Thursday and Friday.

I meant to post between the first and the second rounds... but I didn't.

I meant to have things to say other than how this is affecting me... but I don't.

It has been a part of my every waking thought for the past four weeks... well, longer, really (since I found out it was going to happen).

And today might not be the best day to write about the whole mess, because I really don't feel well. And I'm tired of not feeling well. And I want to cry. And that makes me feel like a big baby and I hate feeling like a big baby. But I'm writing about it anyway. I need to. I don't want to forget how rotten I feel right now... because when this is all over (for now) I want to be able to look back on it and, when I'm whining about something else that's going wrong in my life, remind myself that as long as I am still here, I need to get off my ass and just get on with it.

I was so proud of myself last month for getting through the first round, mostly unscathed. Yes, I felt pretty bad after the port surgery, but the chemo seemed to go OK. I wrote about it when I was feeling OK.

Then I stopped feeling OK. Saturday - the day right after - was not too bad. Woozy and shaky were the worst feelings. I could eat. I was tired, but I could move. But Sunday, Monday, and Tuesday? Not so good. Not so good at all. The nausea (you know, the nausea that *most* people don't seem to get with this type of chemo) was awful. The flu-like symptoms that came on later were less-than-pleasant. The fatigue was crap. In fact, it was pretty much all crap.

Now, let's start all over again, shall we?

I really and truly thought it was going to go OK.

I'm really and truly an idiot.

What I've discovered is that no matter what they tell you, this is different for *everyone.* No matter what anyone else has experienced, your experience will not be the same as theirs. It just won't.

And no matter what? This sucks. It really and truly does.

For the past two days, I have felt bizarrely awful. The stronger anti-nausea meds they pumped through my IV are helping, so that's something. But they do *other* things. I feel as though the physical part of me that's *me* - that dwells inside my skin and looks out at the world and makes me move and roll over in bed and change the channel on the TV and think clearly - has been shrunk down to 1/3 its size, then wrapped in gauze, and set to 'vibrate.' I don't know any other way to explain it. I don't feel in control of myself. I feel dizzy and sweaty, and even though the threat of throwing up isn't on the front-burner, it's sitting there on the counter, just waiting to be put in the pot. And my heart and lungs feel as though they're being gripped and squeezed regularly, but in a frustrating non-rhythm, so that catching my breath is something I have to *think* about and do when I can.

It's alarming. It's scary. And it sucks.

It really and truly does.

And I don't want to sound like a baby. I don't want to whine or complain. I want to be brave and just plow through and get on with all the other things I have to do and want to do, like work and swim coaching and mowing my lawn and cleaning my house and hanging out with Ryan and taking Sunny to the park.

But right now? All I want to do is curl up in a little ball and cry.

And I hate that.