My neighbor told me the other day that The Farmer's Almanac said we weren't going to get any snow this winter. I wasn't unhappy about that after last winter, when we were ass-deep for months. But? The Almanac lied. It's snowing in Pigsknuckle today! I do like the first snow, I have to admit. Then I want it to be gone and not return 'til next winter. But I guess we have to take what we get, don't we?

It's interesting, really, that the first snow has arrived just a few days before the Winter Solstice -- the day we welcome back the sun and look for the days to get longer. The Solstice is my favorite part of the holiday season -- it's my New Year and my new beginning. Ryan and I have a little ritual, which we'll do as normal on Tuesday, to celebrate the shortest day of the year. We light a fire in the fire pit outside and bundle up around it, with steaming mugs of hot chocolate. In the pit we burn 3 lists, which include things we want to send up to the Universe...

First is a list of things for which we're grateful. I like it to be good and long, full of the big important things and the little important things that make us glad to be here on this planet, even when Life isn't going as well as we'd like.

Second is a list of things we'd like to let go of -- fears and hurts and grudges. They do nothing but hold us back but letting them go isn't always easy. Writing them down and putting them out there helps.

Last is a list of things we want for other people -- specific things for people we know and general things for those we don't. I like to include good things for people I might not even like because I believe that what you put out there comes back to you.

What about you? Does the end of the year signify a new beginning for you? Do you do anything special to acknowledge it?
Posted by Diane at 1:30 PM 11 comments:

And no, I don't mean Santa Claus. This time.

So, you guys know I have a pretty terrific kid, right? There are moments when I'd like to trade her in for a puppy, but most days? She's pretty fabulous... 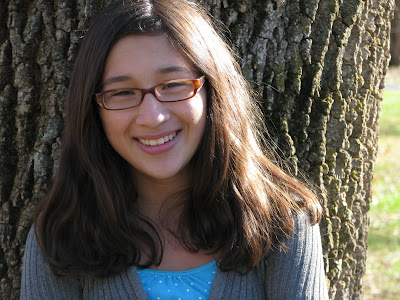 In some ways, she's very much like me, which is understandable, as we spend a LOT of time together. I have full custody of her and though her father has liberal visitation, he chooses not to take advantage of it. He hasn't seen her in nearly a year. I'd like to say this is unusual, but it's not. Since we split up six years ago, I can count on both hands the number of times he's seen her. This once-a-year thing has been the norm for the past three years. He makes all sorts of excuses for his absence, but that's what they are -- excuses.

Luckily, Ryan was never used to him being there. Even when we were married, he was working away from home and only (barely) there on the weekends. So when we split up, not seeing him was just par for the course. She didn't really miss him. And when she did, I'd make excuses for him, on top of his excuses. I stopped doing that, though, when she got older and wiser, as I try not to ever lie to her. But I work hard to make sure she understands that his absence is not about her. That her father's lack of attention is about his deficiencies; that he loves her more than he loves anyone... he's simply not capable of love or expressing love the way most people are. And that is not her fault.

She's been willing to forgive him a lot. I do a pretty good job of being Mom and Dad, so not seeing him isn't the end of the world. And for a long time, he still called her a few times a week to check in, and that seemed to be enough for her.

But things changed this past year. He did a few things that were pretty unforgivable... things even I couldn't spin. He let her down. He broke her heart. And then he pretty much abandoned her. Since her birthday at the beginning of August, with the exception of a one-line email on the first day of school, he has made no attempt to contact her.

She doesn't get it either. But even though it would be understandable if she acted out or got depressed or put me through Hell because of the heartache he has caused, she doesn't do any of that. As I say, she's like me in some ways and, thankfully, she inherited my sense of humor. I love this, except when she uses it against me (which is more often than I care to note here)... then it's not quite so funny. But it serves her well, in general. She chooses to laugh at this awful situation with her dad rather than wallow in it. She has dubbed her father, "The Donor." It makes me chuckle, as that's how I think of him (though she didn't get the name from me!). She makes a lot of jokes at his expense now and though I don't (usually) allow her to be disrespectful or ugly, I let her get out how she feels, grateful she's able to deal with her pain in some way and wind up laughing about it.

A couple of weeks ago, we were in the grocery store, picking up a bottle of wine to take to a friend's house for dinner. I was looking for my favorite Merlot when Ryan started to laugh. She nudged me and pointed to a bottle of wine called, 'Fat Bastard'. Then she said, "Look, Mom, they named a bottle of wine after Daddy!"

I tried not to laugh. I tried to look stern. I failed. Miserably. Then I hugged her, kissed her head, and said, "I'm so glad I'm the parent you like!"
Posted by Diane at 12:10 PM 21 comments:

This past week has been one of the most stressful I've experienced in a while. Truly. Financial issues (where "issues" = "crises of colossal proportions") have been on the front burner. My head was nearly inside the oven (had the oven been gas and not electric, it likely would have been!). A couple of big bills due, a few weeks before Christmas (whoo hoo), and everyone who was supposed to be paying me wasn't. From Saturday to Wednesday, I was sick to my stomach, trying to sort out an issue with the person I thought was going to be my new, wonderful, spectacular boss. As a friend of mine used to say, wrong again, buffalo-breath.

I did get paid. Eventually. After a lot of run-around, chasing down, and lying (I did the chasing down, not the running me around or lying... he did that). It was frustrating (where "frustrating" = "ready-to-go-postal"). I wanted to scream and kick someone in the shins. Or, you know, somewhere. But I couldn't say or do what I wanted because I needed the money and needed the work and I thought I had to salvage the relationship... I had to be professional and understanding... I couldn't rock the boat, baby.

After the last lie was told, before the money was in my account, I had a bit of an epiphany. This little voice in my head said, "Diane, you are better than this. You deserve better than this. And you do NOT need this guy. You can get your own work."

And for the first time in a very long time? I actually heard that voice. And? I even believed it. Mostly. I didn't shoo it away or tell it to shut up and that it didn't know what it was talking about.

And that? Is huge.

So I set about getting a few things done -- things I've been putting off for reasons I don't even want to think about. And I got my business Facebook page up. And then I got my website up and running. And then I started networking and promoting my business and myself. And within 24 hours, I had a job. Not a big job, but a job. And I got the promise of more work to come.

I'm askeerd. I don't know what the future holds. But it can't be less or more difficult that what the past has held, that's for damned sure.

Oh? And I rocked the boat. In a (mostly) professional way, of course. I told that guy what I thought of the way he'd behaved. And? It felt pretty good!
Posted by Diane at 12:26 PM 13 comments: