I was in the grocery store today and realized that Thanksgiving is on Thursday. I don't know how it happened; it's nearly winter; 2015 is nearly over. Time isn't just flying by... it's flying by at the speed of light.

The other day, a friend was talking about do-overs; she said she'd like to go back and do-over a particularly difficult period of time in her life - one that set her on a course that has resulted in even greater difficulty.

So I said I wouldn't mind a do-over either, but I'd have to go back knowing what I know now. Otherwise, it's pretty likely I'd screw up as big (or even bigger) than before.

Then I started to really think about it...

I thought about the point at which I'd like to start over...

There are so very many potentials...

The moment I found out my marriage was over?

Before Ryan was born?

Before I got married?

The more I thought about the mistakes I've made along the way (the many, many mistakes), I figured I'd really pretty much need to go back to junior high school and start all over.

Then I thought about avoiding all those mistakes...

What would my life be like if I hadn't made them all?

What if I knew in junior high school that being awkward and ungainly wasn't, in fact, the end of the world or what would define me for the rest of my life? What if I just allowed myself to be who I was and let people like me (or not) instead of trying so hard (and failing) to fit in?

What if I had studied harder and actually found a career I really wanted right out of school?

What if I'd been smarter with my money? Man, that's a big one. A really big one.

I thought of all the people I've met in the past 35 years - the people who have become my family. If my path had gone in a different direction, would I even have had the opportunity to know them? Well, if I took all my knowledge back with me, I'd be able to find them, certainly, but would I be able to know them the way I know them know? Would they know me the way they know me now? What if they had never had to see me at my worst and most vulnerable? What if they hadn't had to pick up the pieces of my shattered self they way they have done, so, so many times. Would they love me the way they love me now?

I thought of Ryan - what if my choice in husbands had been different? Had I not met her dad, she wouldn't be here.

Would I have worked harder to save my marriage? Would I have even been able to prevent its demise? Would I have wanted to? What if I had... I would have become a different person. And if I was a different person, I would be a different mother. If I was a different mother, would Ryan be the same amazing person she is today? Would she be as resourceful or as independent or as practical and passionate and appreciative of everything she gets if she had grown up in a financially secure, two-parent household... where one parent was a narcissist and one didn't even recognize herself in the mirror?

Would I have gotten Sundance?!

What if I went back to when I moved to Pigsknuckle... and I went about the whole dating process differently and I met someone I wanted to spend the rest of my life with? What would Ryan be like if she had a father who loved her and who was present in her life? What would I be like if I had someone to rely on and share things with -- if I didn't have to do all the things by myself?

What if I'd not been scared and I'd picked up and moved us to England when I really thought about going - when it was within my grasp? How would things be different then?

What if I'd treated my body differently for all those years? Would I have gotten cancer?

But here's the thing... in every scenario I imagined, for everything that got better, I lost something -- a person, an experience, a lesson, an understanding...

And I didn't even get into the whole ideas of 'What if your new mistakes turned out to be even bigger than your old ones?' or 'What if, regardless of all the different choices you made, you wound up getting run over by a bus?'

My life is not where I want it to be. There is never enough money or time and I'm always tired and needing something out of reach.

But I have so much.

I have people who love me, friends who are family, a daughter who shines so brightly, she makes my heart ache, and a job I love.

And when it's all said and done, it really comes down to the fact that do-overs aren't possible.

I think it's probably for the best. 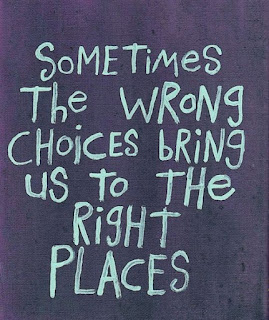