Today was a good day.

It was a really good day.

I went to the cancer center for a follow-up visit, as I had a CT scan and blood work done on Tuesday. I'd be lying if I said I wasn't a tiny bit worried about the results. It was an irrational worry, really, as I've been feeling pretty good for a few weeks and all the once-visible tumors have shrunk.

It's hard to keep at bay when the word 'cancer' is in play.

Turns out? The worry was unnecessary. My scan looked great! All the nasty tumors have shrunk and every single one of one of my lymph nodes is now within normal size range! Squeee! My doctor even used the word remission. Remission, people! She was quick to remind me that it's not a full one, as this lymphoma will never go away. The cancer is still there (everywhere) - you can see it on the scan - but it's teeny-tiny now. It should take some time to grow up again. So yeah, we'll call it remission and I'll take it!

And my blood work? Well, it looked amazing! My doctor couldn't believe that my thyroid function, which was an unbelievable mess a few months ago, is now down to 'borderline normal.'

Not shocking, really. I've always been 'borderline normal' (and a bit more borderline than normal, to tell the truth).

She asked if I'd been taking a new medication for it - one that maybe my GP prescribed, as she recalled how sick I got with the one she gave me (and how sick the one before that made me, too). "Nope," said I. "It's the whole food diet!" I think she was a little skeptical at first, but she knows it's the only change I've made. Chemo is the only medication I've taken (besides anti-nauseas) and it doesn't affect thyroid function.

Part of the reason I started the Whole30 was to attempt to right my hormone levels, including my thyroid, which was jacking me up big-time. The people who swear by the plan tout it as the Second Coming and while I doubted it would affect me to that degree, I had hope that it would make me feel a bit better.

Turns out? That hope was well-placed. To go from skyrocket-high to borderline-normal is pretty fabulous. And I? Am happy! My doc? Was impressed.

Anyway, I felt pretty great when I left the exam room. I marched straight to the reception desk to tell the sweet girl who checks me in what the doctor said. I repeated the 'R' word quietly, though, as there were a lot of people in the waiting area, some of whom will never hear that word, and I didn't want to make anyone feel bad. But when I turned around, everyone within earshot was grinning ear to ear - at me and for me. It felt good. Cancer is a club, you know. It's not one anyone in his right mind wants to belong to and the dues are sky-high, but it's a club nonetheless. And no matter how rotten one member feels, a victory (no matter how big or small) for another is a victory for all. Victory brings hope to a place where hope can be frighteningly scarce.

And today? On this very good day? The hope I'm feeling is the opposite of scarce. It's positively blooming! I don't know how long I'll get before I have to go through this ugliness again, but I do know I'm going to make the most of whatever time I can eek out. I know I'm going to work hard to get as healthy as possible before the next course of treatment. I know I'm going to do as many of the things on my bucket list as I can manage.

And I know I'm going to get on with this business of living!

Last week, while we were on the road to Acadia National Park in Maine, I mentioned to Ryan and her friend Piper that I'd read how, if a person has trouble sleeping, she simply needs to go camping for a week. It's supposed to re-set our internal clocks naturally. Ryan said, "Yeah, it's all about the Acadian Rhythm." Then she laughed and corrected herself, "I mean Circadian Rhythm!"

But you know what? I think she was right the first time.

We went to Acadia and Bar Harbor back in 2008 and we loved it. Returning was always on our to-do list but I planned for us to go next summer, when Ryan could help with the 16-hour drive (12 hours according to Google Maps. Google Maps is on crack). Then friends of ours said they'd like to go this summer, so we changed plans... but plans have a way of falling through and our friends weren't able to go. I asked Ryan if she still wanted to make the trip. She did, but she asked if she could bring a friend along. I was reluctant at first, as I like our vacations together, just the two of us, but I decided it would be a good idea this year. I'm still feeling the effects of chemo and since vacations with Ryan are go-go-go, I knew I'd never get to sit-sit-sit (what I really needed). So Piper came along. It was a good decision.

The drive up was exhausting, as 16-hour drives are wont to be, and we arrived at 9:30 pm, just before the campground office closed. We put our tents up quickly, in the dark, blew up the air mattresses, and crashed. Hard. I slept like the dead, for the first time in I can't remember how long. It was kind of wonderful, let me tell you. 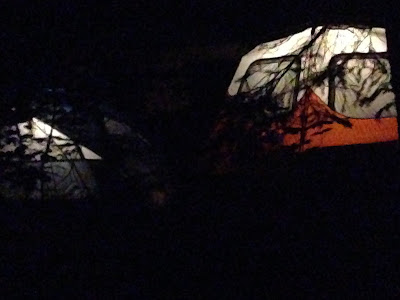 During the week, we split our time between doing things as a trio (like wandering around Bar Harbor and going on a whale watching tour), and the girls going off on their own, leaving me to do whatever I wanted to do.

Whatever I wanted to do! I was nearly giddy with the possibilities!

I was also sleeping -- and I'm talking good, solid, whole-nights full of sleep. We were heading to bed around 9:00 and getting up at 7:00. My Acadian Rhythm was definitely righting itself.

During my days alone, I traveled the carriage roads (built by John D. Rockefeller, Jr.) on foot. I did seven miles in one day, which was quite a hike for me, given my limited physical activity for the past year or so. It was extremely tiring but I also felt incredibly accomplished after, and stronger than I've felt in a long time. I also explored the 'other side' of the island, which we never ventured toward the last time we were there. On my way to the Coast Guard-manned lighthouse at the southern tip of the island, I came unexpectedly upon the 'sea wall,' which was quite spectacular (though pictures simply don't do it justice). 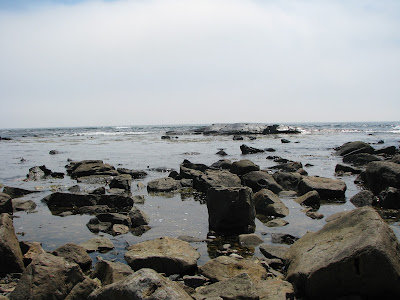 I made a second visit there, later in the week. This time I arrived earlier in the day, when the tide was out, and I sat for a long time, just breathing in the salty air... that wonderful smell -- there's really nothing quite like it; it gets into your lungs and your pores and your head and your heart and it just... fortifies you.

At the sea wall, I wandered around on the rocks, taking photos of all the little tide pools and life left behind by the waves. I built two little cairns, which was much harder than you'd think. After, I was writing in my journal and I realized what a metaphor for Life those little stone towers are... 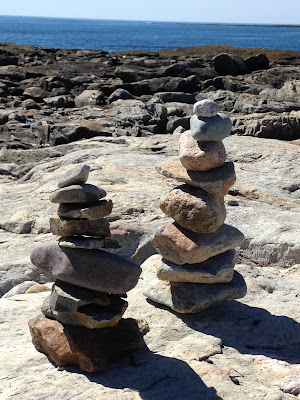 There were stones everywhere on the beach -- endless possibilities. I kept choosing different ones, trying them out, trying to make them balance. They didn't all have to be flat or a particular shape (in fact, when I chose all flat stones - the ones that balanced perfectly on the first try - the cairn was quite dull and boring-looking) - they just had to fit. I had to try out several to find the right ones. Finding the balance was terribly difficult but when I did it, those cairns just... worked.

Just like Life. Find the balance and it just... works.

On our last night, we signed up to do a sunset sea kayaking tour with Aquaterra Adventures (look them up if you're in Bar Harbor! They're great!) - the three of us (the girls in a tandem kayak and me in a solo). I was pretty nervous. First, I knew it would be physically taxing. Second, it was a new experience for me and I'm not a fan of looking foolish when I try something new. But I had put it on my Post-Chemo Bucket List, so I decided to put my big-girl life vest on and just do it.

It was hard. It was really hard. I was all alone in a very long kayak, trying to keep up with a group of eight teenagers, who were doubled-up and paddling in concert. I was, clearly, the most out-of-shape person in the group, as well as the oldest, and I struggled. Had I been able to paddle a bit and then rest, it would have been OK, but I was so slow that by the time I caught up to everyone, all of whom got to rest while waiting for me, they took off and I had to go again! Gah! I felt like one of the slow swimmers, who takes so long to get to the wall that everyone's gone when she gets there and she has to do another 50 immediately. For the record, I will be kinder to those kids when I coach next summer.

But I did it! Our instructor/guide, Travis, was wonderful and never made me feel like a slowpoke. When I paddled in to the dock and was able to extricate myself from the tiny cockpit (with help), I was on top of the world. I did it! I paddled two miles! Around an island! In ocean waves! And I didn't fall out, roll over, need to be towed in, or die! It was BRILLIANT!

This past year has been hard. It took me to my knees, both physically and emotionally. But it also made me realize how much I want to live. It gave me things to think about and work toward. I've realized that I don't want to just survive... I want to thrive. So, to go from being sick as a dog just a few weeks ago to feeling strong and healthy, able to do physical things I didn't think would be possible for a long time to come? Well, I can't really even describe how that made me feel... how that makes me feel.

It's my Acadian Rhythm.

I found my Acadian Rhythm.

And I never want to lose it. 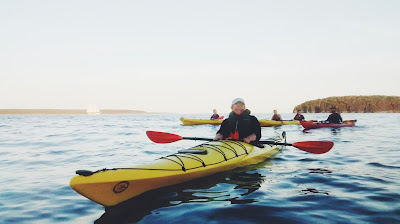