Just Do It. Damn It.

Happy New Year, peeps! Hope you made it through the holidays unscathed. They were OK 'round these parts... relatively quiet and unremarkable (which is not at all the worst way to spend them).

So. Here we are. It's finally 2017 and the Very Bad No Good Stinkin' Rotten Year is over. Now, for just a moment, let's pretend that flipping the calendar from December to January is not actually just an arbitrary sort of act, and that yesterday morning really DID begin a whole new period of time during which the Universe will take a chill pill and calm the hell down. Shall we?

While I've sort of given up the whole 'new year, new me' way of looking at Life (given that I'm only ever the old me, regardless of what the calendar says), there is still a part of me that hangs onto the 'fresh start' shtick. It's appealing, no? I like the idea of a clean slate... a new year full of possibilities and none of the detritus left by the maelstrom of the previous year.

It's a nice idea, certainly, and works in theory if not in reality.

In the past, I've chosen a 'word of the year' to focus on because I read a blog post once about how that helped the writer bring good things into her life. Lovely, right? Last year, my word was 'abundance.' And I got it, man. In spades. An abundance of utter shite, quite frankly. My year included chemo, the loss of people I loved deeply, my mother's long and serious decline in health (which has affected my life dramatically, as I have become one of her [reluctant] caregivers), my beloved Sunny's death, a terrible accident that nearly killed my ex (the recovery from which has been arduous and has seriously affected us both financially), the election of Donald Freaking Trumplethinskin (I can barely type that without seizing), and what feels like an entire world that's falling apart at the seams.

Good stuff did happen as well (a great new position at work, the Brown-haired Bestie's wedding, a new pup [which, actually, may or may not be a good thing... we're still working through some things]). But by and large, I felt like every time I got back on my feet, Life hit me hard. Right in the face. With a kettlebell.

Anyway, I decided I wasn't going to do the 'word of the year' thing this year. It's a charming idea but it just doesn't work for me. If I'm being honest, not only do I not focus on it, I pretty much forget the damned thing until people start talking about their new 'word of the year' choices near the end of December.

No, this year I'm going to employ a mantra. It's one I'm going to write at the top of every stinkin' page in my planner (which I have to keep for work and which I use for personal things as well):

And some days, I'm sure it'll be necessary to add a bit to it. For example:

Just do it. Damn it.

Just do it already, will ya?

Christ on a pogo stick, just do it!

What is taking you so farking long? Just. Do. It. 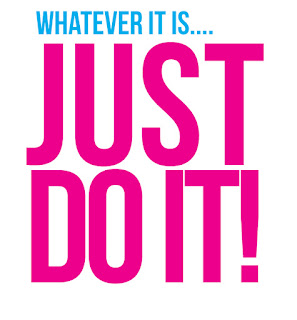 So my mantra for this year (or this random, arbitrary period of time) is: Just do it.

Any of the things.

Will my mantra make me do all the things?

Because where I am right now? Not the best place. Not the worst, certainly, but not the best.

I've learned not to make resolutions because I break them and, once broken, they're off my radar altogether. I've learned that while goals are necessary in life (they are, aren't they?), I tend to make too many or I make them too complicated, then I get overwhelmed, and in the end, I accomplish little (and wind up hating myself just a little bit more).

But this? This is just a request. A suggestion. An order. A demand. Just do it. Whatever it is, Diane, just do it. Just get up, just buckle down, just focus, just un-stick yourself, just spend a little time knocking a thing or two off your to-do list... just do it.

It'll work, right? I mean, something has to.