I thought I'd officially introduce you to my boy. Everyone, meet Sundance. Sundance, meet everyone. 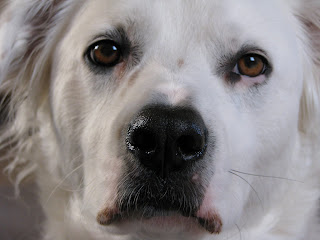 He's pretty cute, no? He's a good boy, too, though he hasn't always been. And no wonder, really. Sundance was sort of an 'up yours' move. See, my ex said "No more dogs!" but after I found out he'd been having an affair, I marched straight to the shelter and picked out a puppy. Up yours, cheater-man. It felt SO good. However, someone should have told me that you should never make an up yours move that can bite you in the ass... which mine did... literally. Actually, he was the cutest puppy on the planet. And the most destructive. And rambunctious. And he thought my daughter, who was 5 at the time, was a big chew toy. Together they were HELL. It was like having two 5-year-olds in the house at the same time, which I never wanted, which is why I only had ONE kid. I was honestly not certain he was going to make it to his first birthday and he was the first dog I ever had that I considered giving away. He chewed stuff... like walls. He ate stuff... like crayons (which made him poop rainbows... which was sort of cool, actually). I didn't like to call him a 'bad boy' so I called him a 'bubba'... all the time... which evolved into Bubby... which is what we still call him most of the time (though he's not a bad boy anymore).

But as difficult as he was, in many ways Sundance was my salvation. I got him at the worst possible time, as my life was falling apart, but he gave me something to focus on... something simple... something I wasn't worried about screwing up. My marriage was ending. I was terrified about how my child was going to be affected. I was stressed about managing life and finances and parenting on my own. I was scared and sick and angry and hurt. With everyone else, I had to put on a brave face. I had to pretend I wasn't falling apart. With my puppy, I could let it all out and still, he licked my face and cuddled with me on the couch and just loved me. He needed me but he gave so much more than he took.

He is still my salvation some days. Yes, he sheds (I get enough hair off him every day to knit a new dog). Yes, he muddies (and smells) up my car. Yes, he sleeps on my bed and he can somehow turn his 70 pounds into 250 (which takes up a LOT of room). But he also smiles when I get home (and I know you non-dog people think I'm nuts, but I'm not). He makes me laugh more than most comedians on TV. He makes me get off my butt and get out to the park every day. He loves me more than any human has a right to be loved. I am seriously flawed, but he doesn't see any of those flaws. To him, I'm just right. And to me, he's just perfect.
Posted by Diane at 8:02 PM

Awwww..he's a sweetie pie. Thanks for sharing your buddy with us.

I have a rescue dog too and she is one of the best things that has ever happened to me. I think that if I would have known her longer, I wouldn't be nearly as neurotic. :-) She makes life simple.

aint pets the best -- they arent pets, they are family. i dont think there is anything better than a dog or cat or whatever to makes us realize what human is being about

sundance is a cutie

i just brought home a new cat (i would love a dog, but i just dont have the time right now -- but it will happen) - and i am already in love (my beloved george - who was the best cat, who also thought he was dog, - had to visit kitty heaven a few months ago - and it still hurts)

He's so beautiful! I very much know what you mean about him 'smiling' at you, that's adorable. (I laughed out loud at the biting in the ass...literally comment.:))

Such expressive eyes! A truly wonderful dog. I couldn't agree more - life is so much better with pets.

The love is obviously two ways.

Dog-god? I think dogs are a reflection of their masters and it has been said that dogs are the one animal who has met their god. And they seem inordinately happy with the arrangement. Lucky dog.

Such a cute doggie!!!

I am such a dog lover too!!! Love/Hate actually, lol.
But I totally understand.

Awwww...you're right, I'm not a dog person, but I get it. I wish I was a dog person...he looks so sweet - it's nice that you have Sundance minus the cheater ex!

Look at those eyes; how could you not love him! My little terror either farted or really needs a bath ... ewww!

Stop by, I have something for you. ;)

When my daughter left for college 8 years ago...my Husband bought me a golden retriever named Riley and she saved me! When my last son bought a house and moved out...we adopted a Chocolate Lab. named Miley and they are my co-workers as I work from home! I understand! These dogs love me and I love them so very much!
Sundance is beautiful!

True, true. Sundance looks like a sweetheart. Plus, an animal is always loves you especially when you need them most.

Coming over here because you told me to. What a great boy... love his nickname Bubby too. Amazing what a role he has filled in your life and continues to do so. I laughed at the terror he and your 5 year old did at the time. I can just see them two making a mess!

I think he must be somehow related to my old golden retriever, Cinnamon (who was affectionately called Mimi most of her life becuase my little brother had a hard time with "Cinnamon".) We got Mimi when I was 7 and she just passed away last month. When she was a puppy, she ATE OUR WALLS! No matter how many times we'd patch them, we'd come home and find holes again, and she'd be covering her nose with her paws, trying to hide the white powder of sheetrock. AND, she ate a 96 pack of Crayolas, resulting in rainbow poop all over the house! I had never heard of another dog doing that!!! She also ate couch cushions, carpet and monkey grass (which results in serious vomitting.) Anyway, she was our baby, and she is missed very, very much.
Sorry for the novel on your comment page, but had to share the similiar experience!! I know Sundance is a wonderful friend and valuable part of your family. :)