The other day, while mooching around Facebook, I read an article about teens and 'tweens and a guy commented, "I wish the word 'tween could be excised from our vocabularies!" My guess? This guy is NOT the parent of a 'tween. It's a word that describes the 9 - 13-year-old set pretty perfectly. They're not little kids. They're not teenagers. They're stuck in this uncomfortable, awkward, 'in between' stage of life, where they're trying hard to fit in and find their way and be independent... but they still need their mommies and daddies for, oh, so many things (and not just money).

I am the mother of such a creature. I've dreaded these years, truth be told. My own 'tween years were horrid, really. Middle school was a nightmare. I was uncomfortable in my own skin, which was stretched over too-big bones (specifically, a too-big nose that caused me more grief than I care to recall, much of which was brought on by yours truly), and covering a quivering mass of insecurities and worry about every friggin' thing in my line of sight. For example, I remember convincing myself I had scoliosis and was going to have to wear one of those awful back braces for my entire middle school and high school career. I used to stand in front of my mirror, looking for the curve in my spine that would spell the demise of my (non-existent) social life, trying to figure out how I could keep it from my parents and still not wind up looking like Quasimodo. As I say, nightmare.

Ryan, however, doesn't seem to have the same bad dreams I had. Oh, don't get me wrong, she has her own list of insecurities, but, so far anyway, they don't seem to be debilitating. Her reaction to the realization that she'd inherited her nose from me? "Well, you grew into yours, so I'm sure I'll grow into mine. Eventually." Heh. She's got this amazing sense of self that I never had... hell, I'm not sure I have it yet! And she's absolutely blossoming in middle school. She's working out that not everything will come easily to her (math) and that she's going to have to work harder at some things than others (math) but that she really can do it (math) if she keeps a positive attitude. She's finding new things that interest her and she's surrounded herself with a group of friends who seem to be, in general, supportive and encouraging, not back-stabbing and mean, as girls this age can often be. She's taking on new responsibilities at home and at school and she's managing everything without stress or whining (mostly). She handles disappointments (lots of them to do with her father) with dignity and grace (mostly).

I'm happy for her and I'm so very proud of her but I'm still a little scared of what's to come. Because along with all that good stuff, I know there will be days (as there are now and have been since she turned 3) when I want to kick her butt into tomorrow. It's only been in the past few weeks that I seem to be able to embarrass her without even trying (I've been able to do it intentionally for a long time now!). I've worked out that if her friends are around, I walk a very thin line... pretty much everything I say or do could cause me to fall on the wrong side of the line and subject me to eye-rolling, disgusted looks, and exasperated whines of "Mo-om!"

But I'll take that stuff. Because at night, she still wants me to tuck her in. She still wants me to cuddle with her and just talk for a few minutes before she falls asleep. It won't always be that way, I know. But for now, she's a 'tween. And all is as it should be. 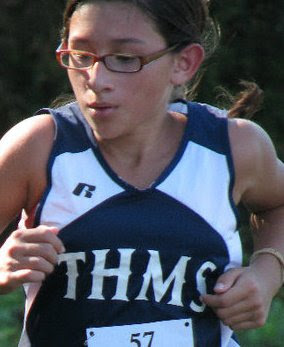 My girl at her first cross country meet yesterday. She? Rocks.
Posted by Diane at 9:48 AM

I so worried about having to wear one of those body casts too!

Why did we torture ourselves so????

These 'tween years will be gone before you know it, too. But right before your eyes, your 'tween will blossom into the next phase and continue to knock your socks off with all that she's become.

I love it when it's glaringly obvious they still need us...and they realize it too!

Oh yeah, there is definitely a place for "tweens" in the dictionary, right after "angst."

I remember my kids tween years, and it's a make or break time, I think. I can remember my own tween years too, and the curse of my Pinnochio nose still haunts me today.

Your youngun is gorgeous, as are you.

Diane- she is growing up so quickly! Look at the difference in her photo today and the ones posted on your side bar! Hang on sista--she won't be a TWEEN much longer!

And what a wonderful and bright "tween" you have too!! She is adorable!!!
Hugs
SueAnn

Oh no ... the "being able to embarrass your kid without trying" mode!!! I dread it and fear it ... I bet it happens to me sooner than I'm ready for. When I think back on how I behaved, I just cringe.

I could relate to each and every word in this post! I have my own 'tween' daughter! my son passed this stage unscathed and without noticing...my daughter not so much! Your Tween is amazing because you has an amazing mother!! 'nuff said!

I envy you your bright, beautiful kid.;)) She looks so good on that picture and so grown up already, despite being a *tween*.;))
xoxo

I don't miss those awkward tween years at all... uhg. Although, some days I still feel like I'm stuck in them. Haha... Anyhow, Ryan is growing into such a beautiful, smart, strong individual. Despite the "wanting to kick her into tomorrow" days (which my mom had plenty of with me!), I know you're very proud of her :)

She rocks and she's gorgeous and she has a great (and funny) mom. You guys will be okay. (And after she grows up and moves on she will be happy to come home and visit you and all her friends will be jealous that you and she can be such good friends.)

As they grow more independent, which is what they're supposed to do, the many challenges for both of you along the way can sometimes be a struggle. But as long as there is tucking and cuddling at the end of the day, it's all good.

My son is going into his golden tween years. I'm not ready and never will be. I like the picture of your daughter running. I was a runner is school as well! I started about when I was my sons age. - Rick