I’m going to kill 2 birds with one stone today. It’s Writer’s Workshop time at Mama’s Losin’ It and I chose the prompt labeled, ‘Describe a time when your pet caused chaos.’ I’m also doing the 6th of 6th photo meme for Sam I Am, who tagged me the other day. I’m supposed to pick the 6th photo from my Flickr account AND the 6th photo from my 6th computer folder and tell you about them. Well, I don’t have a Flickr account, so I picked the 6th of the 6th from my old computer and the 6th of the 6th from my newer computer (and a few more, too). Both happen to be of Sundance, and since I’ve got to describe him and chaos… you see where I’m going with this… 2 birds…

OK, well, I couldn’t really narrow the whole chaos thing down, as Sundance’s entire first year was just one big chaotic incident (click here if you’d like to read more about that)… so I’m going to post pictures of my boy (and my girl) prior to a few of the individual incidents (there are no photos from during or after the incidents because it's hard to take pictures when your eyes are bugging out of your head and the veins in your neck are throbbing… duh).

Here he is on day-one, prior to the Tantrum Incident (also known as the Soon-to-be-Ex’s Meltdown Because He’d Said, “No more dogs!” and Diane Said, “Up yours, Soon-to-be-Ex, because you have no say anymore!” and Brought the Puppy Home Anyway Incident). 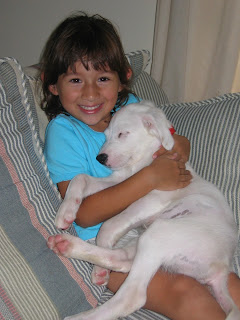 Here he is prior to the Crayon Incident (also known as the Rainbow Poop Incident). 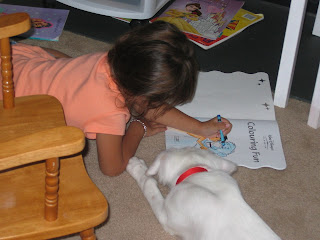 Here he is prior to the Kitchen Wall Incident (also known as the Diane Learns How to Patch, Sand, and Paint Drywall All by Herself Incident). 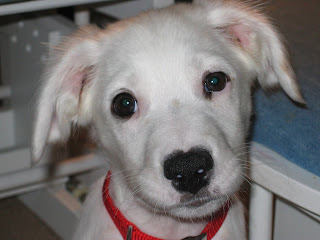 Here he is prior to the Picnic Incident (also known as the Don’t Leave a Puppy and a 5-year-old Alone With a Loaded Picnic Hamper, Even for the Short Time It Takes to Walk to the Trashcan Incident). 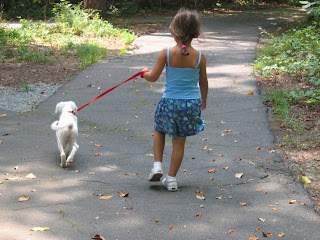 Here he is prior to the Drop It Incident (also known as the Stop Chewing On That Hat and Drop It Right Now Before I Strangle You With Your Own Leash Incident). 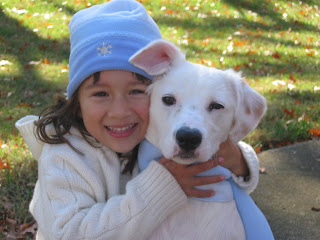 Here he is prior to the Swearing Incident (also known as the Drama Queen Screams “Mommy, that damned puppy just bit my nose off!” Incident). 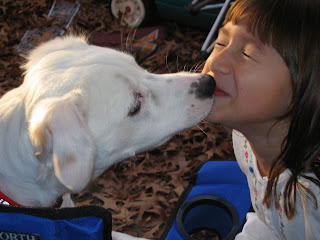 Here he is prior to the Barking Incident (also known as the Scare the Old Lady in the Next Car at the Rest Stop Into a Screaming Heart Attack Incident). 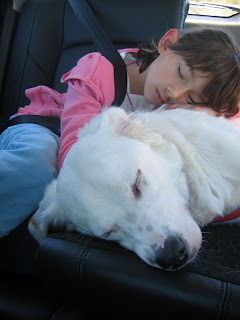 And here he is today. No incidents. No chaos. Just big laughs. And big love. 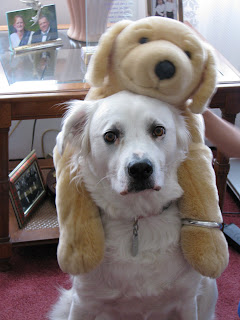 Oh - I fogot he was once that small! He's so cute! And, you know that picture of Ryan and Sundance in the hat and scarf is one of my favorites ever. It still sits in my mirror frame so that I can see it every day when I'm putting on my earrings and watch!

Fortunately, there are no pictures of the Melanie couldn't get Sundance back in the kitchen and called Diane and Cari at Biltmore in extreme distress worrying that Diane's apartment was going to be torn up by the time she got home incident. Because I would look really stoopid in those.

Awwwwwwwwwwwwww! It's lovely to look back and see how they've grown, isn't it?

Even if they have caused you to coin the phrase "Rainbow Poop".

And it amuses me that Ryan said damned, I don't know why but it does. Tremendously.

OMG, this is sooooooo cute!!! CUTE, CUTE, CUTE!!! I love those pictures Diane, Ryan is adorable and Sundance too.;) I just want to hugg them,
You should post more pictures, please, more of these kind.:)

GREAT pictures!!! You had me laughing the whole through this with all the "incidents"....

Oh God, too funny. Mel, I totally forgot that 'incident' maybe I should email Diane a picture of 'us having fun at the Biltmore, while you ran around chasing Sundance incident'

These are too precious. I love that you had holes and the wall and rainbow poop, just like we did with our golden. The great thing is, no matter how much chaos they cause, they are so worth it. :)

Awww...he's too cute. What did you ever so to deserve a puppy like that? ;)

he is really cute.
but i'm more enamored with the fact that she said "that damned dog" as opposed to "that damn dong".
she's got the writing gene.

You are so funny, Diane. Have I told you that lately? Because it's true... I only wish you called Soon to be Ex that name before you actually broke up, to shove it in his face. It would have been marvelous.

Great picture and great stories. We have 3 dogs and all have been puppies, so I can so relate, and now of course I have 10 puppies, yikes. What was I thinking?

Yep. Lots of love there, I'm a thinkin'.

So so so so funny! Loved this post! And your dog may be the cutest dog in the world! thanks for the laugh!

That's half the fun of having a dog, isn't it? Great sequence of photos.

The close up of Sundance is SO cute.

No, I'm sorry, you must have made a mistake with that face and the hole in the kitchen wall incident....

What a great post. Mum and me love your blog. Sundance was a seriously cute puppy. Us dogs are cute as puppies, but lots of hard work too - saying that, it's worth it isn't it? It was funny reading about the difficult times with him, including the rainbow poo. I was an incredibly good puppy. Mum still talks about how incredibly good I was at the side of her past experiences with her other dogs BM (Before Me). The only time I wasn't incredibly good wasn't my fault. A mixture of colitis and being locked in mum's car unsupervised for 20 minutes. It's amazing what can happen in 20 mintues with a dog that has acute sickness and diarrhoea:)

Too many pictures - Ack! - I'm trying to post big pictures on my own blog at the same time! But that first one of Ryan and Sundance is a keeper. It's the cutest picture I've seen in a long time.

Do you read Bill Bryson? You and he have a similar style - a UK thing of laughing at yourself and yet making other people laugh as well.

You made me laugh. A lot. Thank you!

Now that little cutie couldn't possibly be any trouble....

What a face!! He's totally adorable, and your photos are great. You made me laugh and want to read about all of the previous mishaps. Too funny.

Oh my gosh is so cute and snuggly. You daughter is adorable too and they look like they are great friends.

That adorable puppy sure turned into a gorgeous dog!

Sometimes you have to work hard with some dogs until they "get it." BUt the important part is to show patience and love ... no doubt you need to be strict and stern, but don't forget the love.

Those pictures are so cute! I love the one of her walking him and sleeping in the car. SUPER CUTE. The last one I think says it all. He looks so thrilled. Good thing this didn't result in the Incident also know as "The day the dog said enough with the silly photos!"

so many incidents but SO cute.

What a sweet dawg! I love his freckles.
My neighbor's husband gave her the 'it's me or the dog' ultimatum, too. We don't miss him much.

I loved the pic of Sundance getting humped by the furry doggie!
Is that a grimace on his face or is he enjoying it?

What a cute puppy. He couldn't possibly do anything bad. Too cute for all that. Lies all lies.

We should introduce Sundance and my Narnia. I think they'd make a good chaotic couple.

We have two dogs: Lots of incidents, plenty of chaos, many laughs and they've brought some much love into our lives. It got me thinking about the book, "Marley and Me."

So your telling me there is hope for us ...?

Oh my gosh he is SO cute!!! Totally makes me want to get a dog...but I totally know better. :)

I love your dog.